Day 3 – we planned to stay and mooch around Bristol and hopefully meet up, at some point, with our friend Clive for a beer. The weather started as it had on all the previous days – overcast & foggy – but standing on the baclony of our apartment, the temperature seemed to be a little warmer than previous days so I got me legs out again – ever the optimist. We basically spent the day being touristy (SS Great Britain, Harbourside, Cabot Tower, Cathedral, St Mary Redcliffe) and though I tried to get some shopping in up by the Uni at some of the little clothes boutiques Paul wasn’t having any of it and I came away empty handed. Just a for a few minutes though I felt like I could have been a student again, setting out in life with the whole world before me – Oh no hang on that’s just my mid thirties crisis that makes me feel like that 🙂 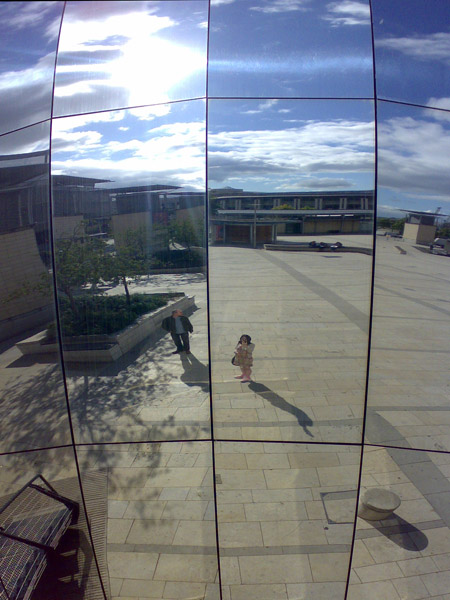 Day 2 was already pre-planned; Photography at Westonbirt Arboretum, with a friend made on a Light & Land trip, where we would try and catch some of the early autumn colours. While the day began misty and overcast in Bristol as we drove inland the sky turned to blue and the sun appeared. A quick cuppa and a catch up and then off we went in search of images. Inspiration came thick and fast and after a good hour or so we still hadn’t moved further than a couple of hundred yards down the path we set off on. Much serious photography was done with my Pentax where I needed total control over composition etc. but I still did get the phone out every now and then. 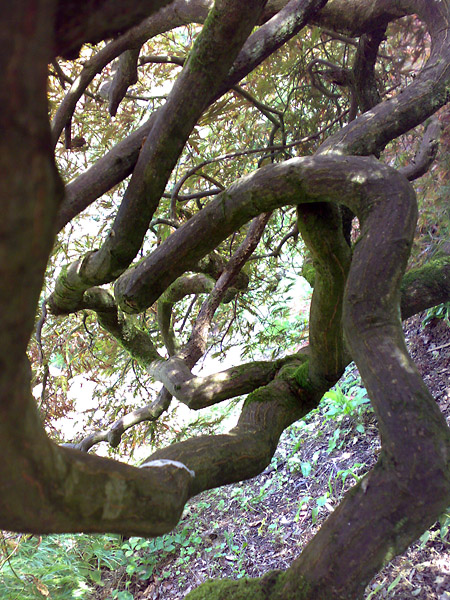 This shot I took with the phone because I couldn’t get the Pentax into the position required to try and capture the spiral shape of the tree trunks. “Mum there’s a lady stuck in this bush!” declared a small voice at one point. “No, I think she’s just taking a photo darling” came the reply which was swiftly followed by a “No, the lady is stuck in the bush”. I find it is best to agree with small children sometimes and for once I was content to be stuck in the bush happily snapping away to myself with a smile on my face.

Here are a few more images that put a smile on my face. 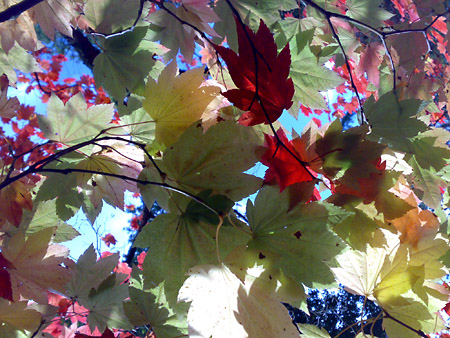 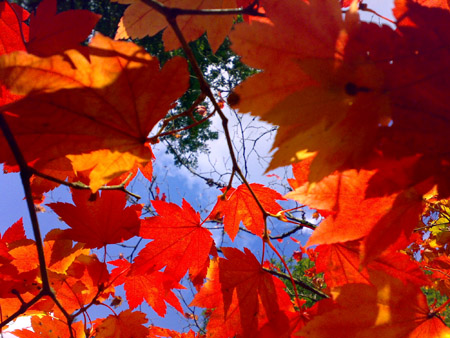 I attracted attention 2 more times before we stopped for lunch. Now, if I’m lying on the ground in front of Bath Abbey photographing a plastic pig (no, not a reliant robin) then I expect to get some looks and the odd enquiry but just trundling around with my camera & tripod I was beginning to wonder exactly what was it that made me approachable? Especially when there were plenty of other photographers about, not in the least the 2 other members of our party!!! The funniest of these encounters was the lady who asked if there was a caterpillar on the thistle I was up close and personal with, then, after I had explained what I was doing shouted for her husband to “come and get some hints from this lady”. I think I baffled her -there can be no other reason for anyone to be prone on the ground with a huge lens poking up at a single thistle other than there being a caterpillar on it can there? 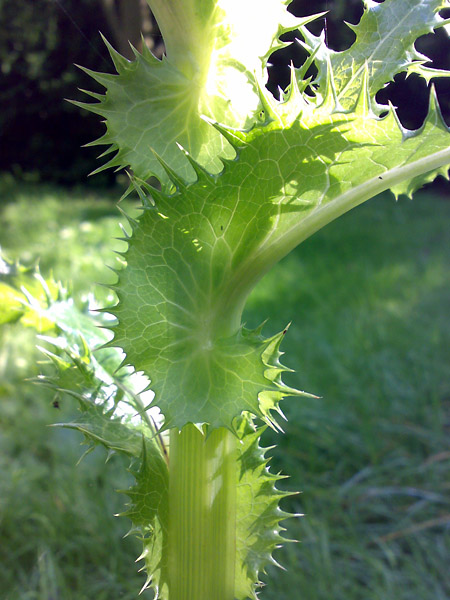 Departing at around half 4 after an exciting and exhausting day I decided that I needed to see the sea and possibly a good sunset. I managed to persuade Paul to drive me over to Clevedon where if I didn’t get a good sunset (it was a bit lack lustre) there would at least be a pier to look at. No sand on the beach at Clevedon but there are some good looking rock formations……….

………………..and it would appear that there’s always someone on the end of the slipway! Don’t you just love the way that while the responsible adults seem to be intent at staring at something the toddler is running hell for leather towards the sea!!! 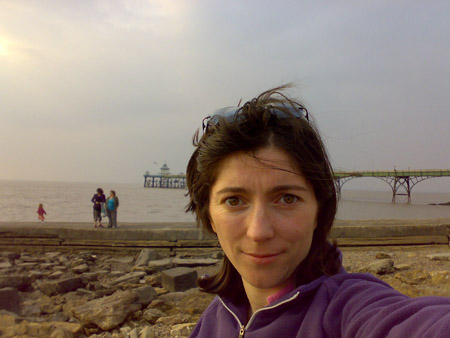 See how happy I look at the prospect of having a walk along the sea front as the weather closed in a bit and the temperature dropped and I still had my shorts on! – lovely 🙂 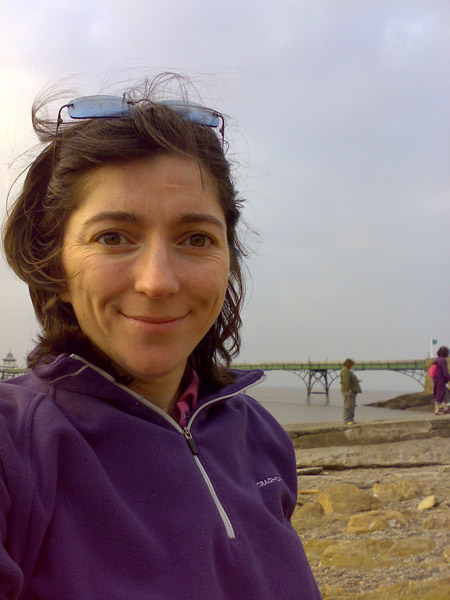 By way of contrast see how happy Paul looks when told he will be accompanying me on my jaunt! Though to be fair, it appears he had just been stabbed in the back by a rather nice Victorian Pier 🙂 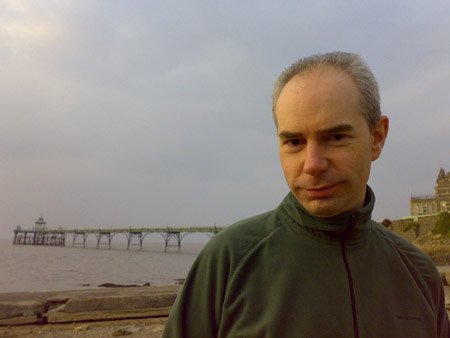 Just had a cracking long weekend in Bristol. Beer, food, friends & photography – what more could a girl ask for? Despite the forecast telling me it was going to be good weather, each morning we awoke to heavy mist and overcast skies – it didn’t look too hopeful for a successful days photography in Bath but despite this I lugged my kit around and did get some proper shots in as well as the usual camera phone stuff when the skies turned blue later on.

First some Cranes in the mist……. 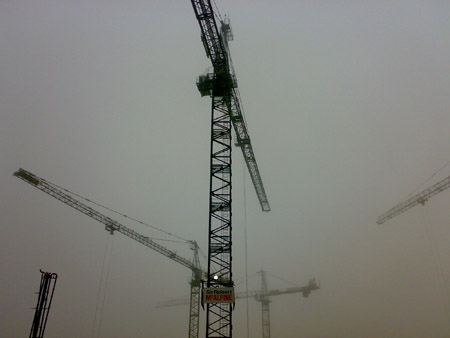 Got off the train in Bath, headed into town and the misty conditions made me stop and look at these cranes performing their aerial ballet where I might not have otherwise bothered. 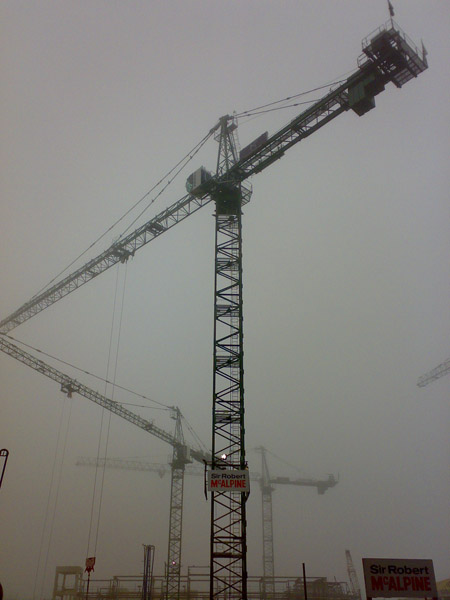 Now I’ve seen Kunst und Kuh in Salzburg and Cow Parade in Marseille but Bath, just to be different, Bath were having a Pig trail. I’m such a sucker or should that be suckler (ooo bad) for things like this so here are some pigs. (click on the thumbnails to enlarge and the back to return here) 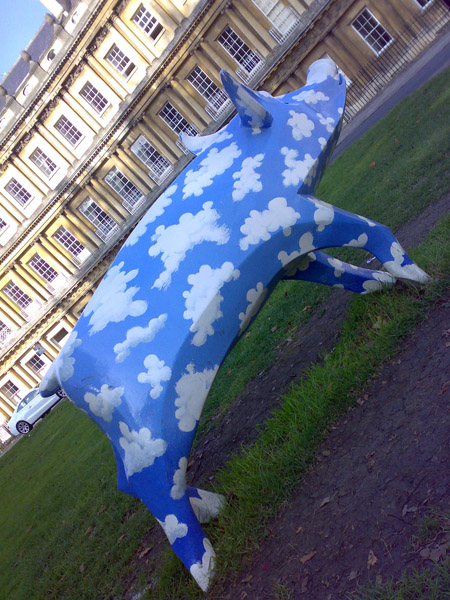 There were three on the edge of the grass in the circus looking out down each of the roads leading to it but I think they might’ve missed a trick here – where was the piggy in the middle? Maybe there was one on a roundabout somewhere called piggy in the middle that I just didn’t find? 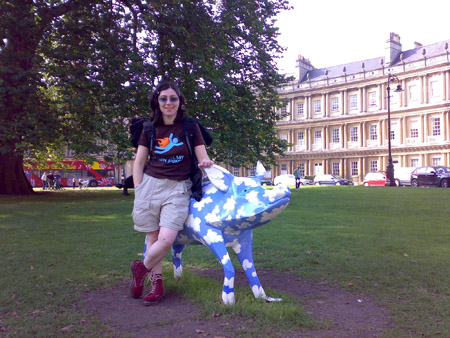 Apart from the pigs I did the usual tourist stuff of visiting the Royal Crescent, the Abbey and the Roman Baths. 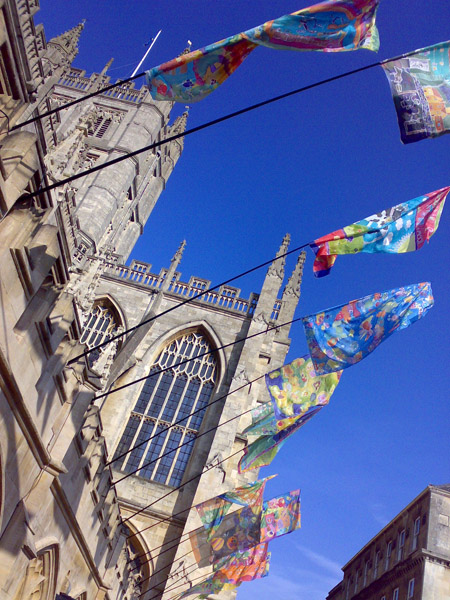 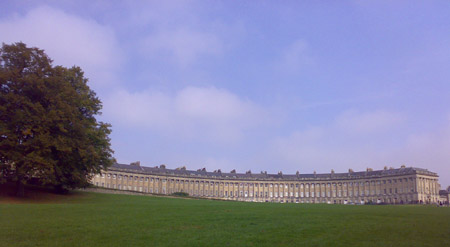 If I’d tried a bit harder I’m sure I could have gotten all of the cars out of the shot. How rude of people actually to live here and spoil the photography 🙂 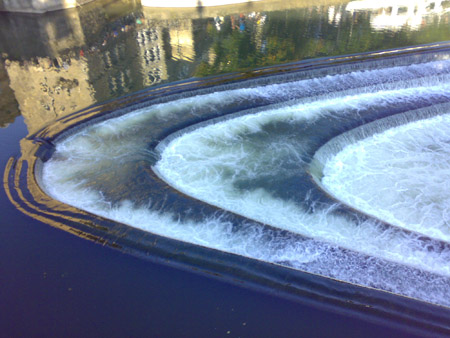 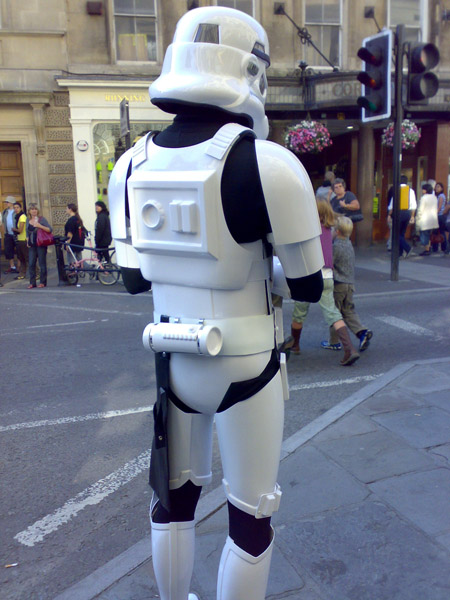 The day in Bath ended with a couple of swift pints in a good local pub, the Volly, where I managed to attract the attention of the regulars who found the fact the more ‘diminutive’ of the two of us was carrying a huge backpack really quite amusing.