Holidaying with the dog is sometimes a bit of a bind. The weather looked good in the middle of our week in Wales so we headed for the coast. It chucked it down just as we got there but undeterred we trouped out of the car to be met with the no dogs on this section of beach until the end of September sign. We were sooooo glad we’d made the effort! There were only 2 days to go until the deadline and to be fair it was raining so hard there were no other tourists around so we could have risked it but in the event we decided to get back in the car. We drove  a bit further and we got the the Dovey estuary nature reserve just as the sun was starting to shine. Dogs were allowed to run free and the tide was out so we parked up and had a game of rugby.

I suppose since I have mentioned the dog a few times I had better post a couple of pictures of him. We call him Domino, you’ll be able to see why 🙂 and here he is taking a short breather from running to admire the view. 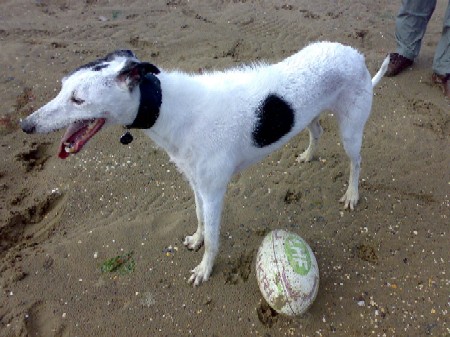